Outlook 2010 will open only in Safe Mode?

Another broken patch from Microsoft came at us this month.  KB3114409 may cause some users to be unable to open Outlook 2010 except in Safe Mode.  No custom settings are retained, your views and options will always revert to safe defaults every time you open Outlook.

For now removing KB3114409 from your workstation cures the problems.  I suspect MS will re-issue this patch in the next week - so you can either hide the update after removing it (if you have automatic updates this is recommended) or ignore it if your updates are set to manual.

WSUS operators should reject this patch on their corporate networks for now.

I've been using SmartThings home automation controller since basically it's release to the public last year.  There have been some growing pains with the system - some of it due to my learning curve, and some due to bugs that they have generally fixed fairly quickly.

This morning I was faced with a very difficult decision regarding their mobile apps.  Major update coming down the tubes from their system to all my mobile devices, along with a big red flag.

To their credit I received a very quick response when I posted a complaint on their forum - but it was to explain why they needed this new permission.

Sadly, I may have to change my controller.  Worse, this controller was one of the few (if not the only) that provided a mobile app for all three platforms:  iOS, Android and Windows mobile.  I really hate losing that cross platform compatibility.

For now I intend to defer the update and wait and see how long the old version of their App works until I'm cut off.  Perhaps they will change this in the near future.  If not . . . back to research mode for me. 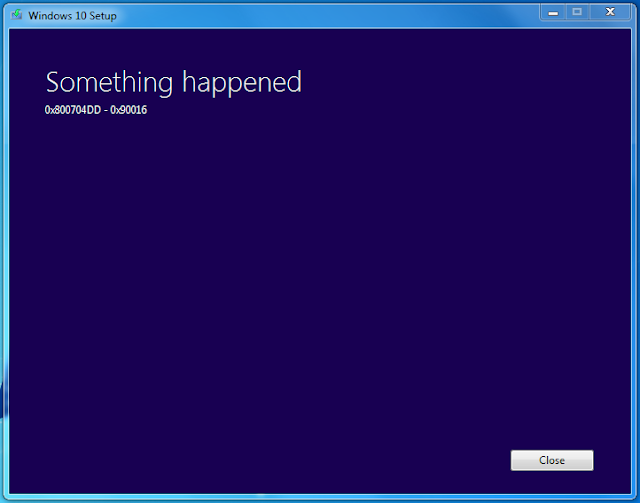 Came across this error while attempting to download the Windows 10 Installer to a blank USB drive using the Media Creation Tool from Microsoft.


Disregarding the inherent humor involved about how useless this error is for a normal end-user, the solution turned out to be simple:

Scenario:  you were logged onto the host machine as a Standard user, you ran the Media Creation Tool, which popped up the request for the local administrators credentials, which you provided.  Then you got the error . . .

Notes:  This goes against the long running advice that I and others have preached for years - don't run your daily usage work as a local admin account, instead set your normal account as a Standard User.  But if you followed all the steps of the advice then you created a real admin account for those times you needed to install or update things.  That model usually worked from your standard account by entering the credentials for the admin account into the resulting popup window when you launched an installer.  Trouble is, even though in this case the popup DID ask for the admin password, the media creation tool broke.

Classic case of Microsoft not playing by their own rules.

Let me know in the comments if this helped, or not - and if not if you found a solution (and please, what that solution was for you.)