January 11, 2011 Update:  This patch has been re-released under the same KB number.  If you previously installed this patch you should update it again.  See http://support.microsoft.com/kb/2412171 for more information.

UPDATE: Pass the salt please -- Outlook team at Microsoft admits to the bad patch.  (Which TOTALLY rocks, would sure like to see more ownership from team MS when problems come out of Redmond.)


Tested systems: Windows 7 x64 Professional and Ultimate, running Office 2007 Professional and/or Ultimate. Office 2007 Service Pack 2 installed. Tested with and without AntiVirus running - AV was not a factor. Also tested with the Franklin plug-in removed: which solved the more severe crashing but did not solve the performance issues. 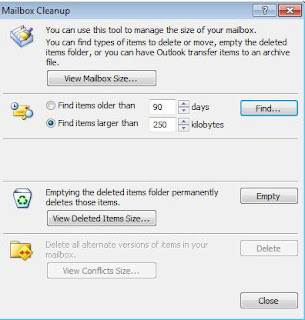 Note that AutoArchive is missing entirely from the patched Outlooks MailBox Cleanup UI, it should be between those two blank lines. 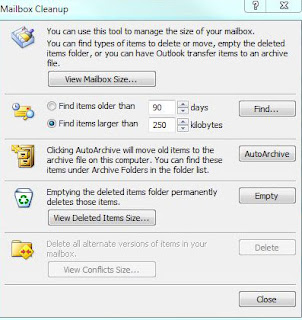 This is what that UI window should look like.

This patch can be removed safely. (Note:  Microsoft has removed their page for this patch - which I had linked to in the original article. This hopefully means a fixed version is coming very soon.  In the mean time, here are the steps to remove this patch from your system.)

1) Close Outlook and any related applications (such as Google Calendar Sync).
2) Open Control Panel >> Add / Remove (or Uninstall) Programs.
3) Click Show Windows Updates or View Installed Updates (depends on your Windows version.)
4) Locate the Outlook update KB-2412171 and remove/uninstall it.
5) Normally a reboot is not required, but if you are prompted to -- wait until you complete the further steps below.

Additionally, I recommend you block this update on systems that have not yet been patched, or block it after removing it so you don't get slammed again.

That should solve the problems for now.  I recommend you check back later - when a fixed version is released I will make a point of announcing it here.

New: Microsoft has removed the KB article for this patch from their website as of sometime this afternoon December 16.  They also appear to have removed the patch from Automatic updates.  If you manually remove this patch as described above to correct problems, you should not have to "hide" the update to prevent it from reinstalling. It will simply not be on the list anymore when you refresh available updates.
Posted by Rob S at 10:30 AM

Comments are welcome but moderated to prevent spam links. I usually check them at least once a day in the evenings - so please be patient with me if your comment does not appear quickly.